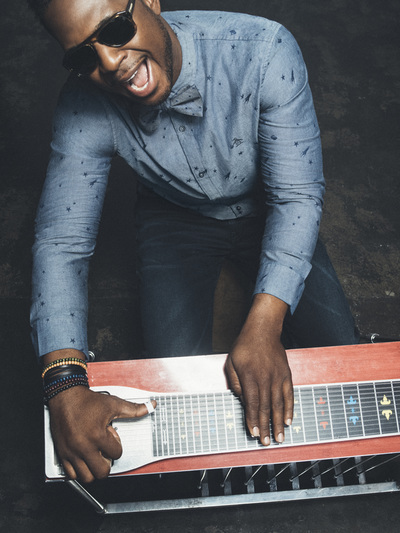 Pedal steel guitar innovator Robert Randolph’s latest album is jubilant and energetic, full of reverb and motivation. It’s a jolt of positivity that comes at the right time for many.

“Everybody’s sorta depressed with a lot of stuff going on in the country and the world,” Randolph said during an interview for the April 3 episode of Country Pocket on WUSB. “People are just looking for something like this to pick them up.”

Count Darius Rucker among those who received this boost. His guest vocals on the track “Love Do What It Do” are among the best in his career largely because it’s so obvious he’s having the time of his life jamming along with Randolph and the family band.

Randolph knew he wanted a soulful country vocal on the track and auditioned the track for an incredibly receptive Rucker over the phone. The fun song with down-home charm provided both Randolph and Rucker with plenty of opportunities to dig into riffs with their respective instruments.

“I’ve collaborated with other people before, and they weren’t too excited,” Randolph said, describing the collaboration process as one some musicians view as more of a job or a favor than an expression of their art. “But [Rucker] kept saying ‘Yeah man, yeah man, I can’t wait’ and while he was in the vocal booth, he was just really excited about it.”

Cory Henry, someone Randolph described as a “great soul” who’s on the path to be “the next Herbie Hancock” also turned in a spirited guest vocal on a cover of Sam & Dave’s “I Thank You.”

“I always had that song in the back of my head to record it one day,” Randolph said. “It’s about time we really start learning to appreciate what others do for us and the joy that someone can bring to us. It’s alright to tell them ‘thank you.’”

Randolph’s signature steel guitar playing is the primary draw on Got Soul. He plays it the way he would in the Pentecostal church he grew up in on “Heaven’s Calling.” The pedal steel rarely makes an appearance outside of country music, and on this track, the sound is quite similar to something you’d hear played at the Grand Ole Opry. On other cuts, like the title track “Got Soul,” Randolph uses it much like a traditional electric guitar, except of course with more reverb and the ability to sound more comfortable at higher notes.

Higher octave and even falsetto harmonies on tracks like “Shake It Off” and “I Want It” sound excellent and contribute to the joyous energy central to the album. The brief “Lovesick” stands out for Robert’s shredding and cousin Marcus’s remarkable drum playing.

Randolph chose to end “Gonna Be Alright,” a song he retooled from a message to a depressed friend to one with a wider audience.

“It just seemed like it should have a little bit of a wider message for the time that we’re in with everyone freaking out and thinking that it’s the end of the world, World War III… So we wanted to re-tweak the lyrics to fit what’s going on today.”

With those changes, it became the best choice to end the album.

“I’m always looking for the positive ending. It’s always to keep people’s minds up. It’s one of those things I carried out of the church. The slogan was you come in here feeling down, but you’re supposed to leave here feeling up.”