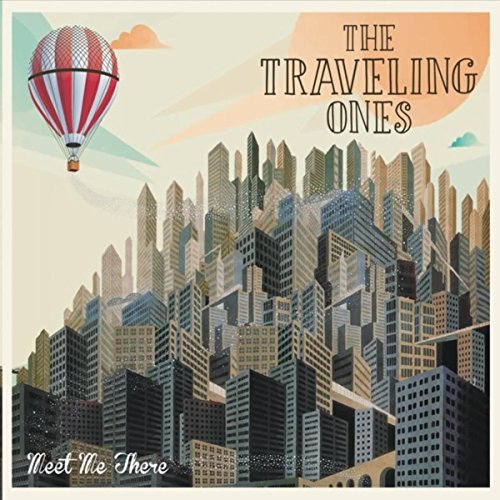 Just a little more than two years ago, Emily Villareal and Justin Ahmanson met at an open mic in Austin and came away from the encounter with a relationship and a band.

On Meet Me There, the pair displays their songwriting talents as Americana duo The Traveling Ones on an album shaped by the harmony and emotions they’ve found in their new partnership. Villareal and Ahmanson build each of their songs on a character who is fleshed out not only by strong lyrics but by interpretive vocals that often add a new dimension to both the character and the song. It’s an impressive debut made all the more accessible by the warm piano playing that runs through most of the tracks.

I spoke with the duo for the March 6 edition of Country Pocket and discovered it’s not so unusual to find a capable songwriting partner at an open mic in Austin.

“There’s a lot of talent here because a lot of people move here for music,” Villareal said. “You’re average open mic isn’t people who don’t know how to perform. It’s a lot of talented musicians who are looking to network. From there it’s easy to say ‘we should meet sometime.’ Everybody’s looking for a new project.”

Villareal provided the vocals for the album’s lead track, “Wildfire Heart.” It’s a breakup song of sorts in which the singer wearily explains that she’s unable to suppress her dreams and emotions. It’s empowering, but it’s also as bittersweet as the fiddle playing that elevates the track.

Ahmanson explained the song was based on two ideas: the unpredictable wildfires of Villareal’s native California and their shared tendency to dive into bad relationships.

“In a lot of ways, that’s what drew us to each other,” Ahmanson said. “When we met each other it was really eye opening how easy it could be to be in a relationship. I think starting off the album with laying the groundwork of our past was a cool thing to do.”

Sweet harmonies highlight a few other tracks, including “You Only Have to Break My Heart” and the passionate “Yours Tonight.” But the pair still functions best on more intimate tracks, with one taking the lead and the other providing backing vocals.

“I’m a Woman” is a quality fiddle tune from the perspective of a woman finally ready to move on from a stagnating relationship. Villareal said she at first struggled to connect with the song before delivering a performance on the album that blends frustration and swagger.

Ahmanson closes the album with his strongest performance on “Ride with Me.” The lyrics come from the perspective of someone trying to convince a significant other to stick with him through the next chapter of their lives, but the vocals sound anything but sure about the promises the lyrics are making.

“I’m almost convincing myself as the song progresses,” Ahmanson said. “I think that’s a pretty cool recording we did.”

Fans of this album are in luck: Villareal and Ahmanson said they want to continue riding together and that they’ve already written a few songs for their next album as a duo.

For more on how Villareal came to connect with “I’m a Woman,” listen here. Or, tune into Country Pocket on WUSB Monday, March 6 from 6-8pm.